This release blog is a two-for-one, as I failed to write one for the previous update. We added a couple new features in the last two updates. In the most recent version (version 2.18), there are 18 new email notifications for various admin and user actions. See below for a concise list: 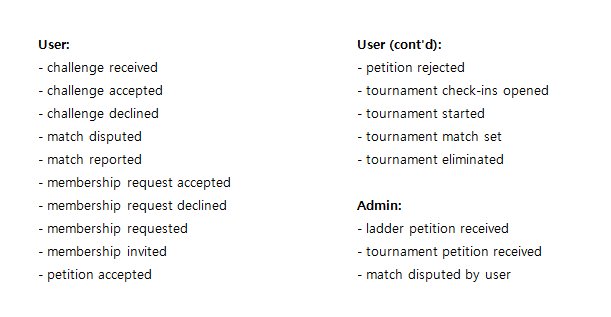 In addition, the email system received an overall makeover. Tournamatch no longer uses plain text emails but HTML-standard compliant messages that look quite nice on gmail and other popular email clients. Most email messages also include a link with button for the main desired outcome, such as approving a petition, confirming a match, etc. Several minor bugs introduced in version 2.17 were also released as well as another which affected the loser’s bracket when check-ins were used.

Earlier this month, we released a version 2.17 update which mainly focused on the individual team members records. Tournament results now affect a team/individual’s career records. If enabled, you can also choose to record the individual players that competed on team matches. This is useful if you have one team with more members than what is actually required for a match. More details in another post to come.

You can find a detailed list of changes in the release notes. Please use your existing download link to grab the latest. Thanks!