The current documentation is for 3.x versions of Tournamatch, not 4.x. This is here only for users with 3.x and should not be used for 4.x.

This table displays all tournaments that currently exist. Each column in the table is described below:

Use this section to create a new tournament. There are a lot of options available to tweak. Each option is explained in more detail below:

{tip} Set requires approval to Yes and use a payment collecting plugin to verify users pay an entree fee before you add them to your tournament.

All three methods will display competitors in a best vs worst format. For example, in an 8 player tournament, the initial match ups would pair seed 1 vs seed 8, seed 2 vs seed 7, seed 3 vs seed 6, and seed 4 vs seed 5. Seed assignments for each selection is detailed below:

Ladder
Select the ladder to use for seeding when From Ladder is selected in the Initial Seeding drop down.

{tip} Organizing a tournament with From Ladder is a great way to hold an end-of-season tournament for seasonal ladder play.

Bracket Size
Select No Fixed Size to permit as many user registrations as possible. Select Fixed Size to limit the brackets to a predefined size which is specified in the next input box.
Bracket Size (extended)
An integer greater than 4 which defines the exact bracket size when Bracket Size is set to Fixed Size.

Start Time
Select the start day and time a tournament will begin.
Auto Start
Select Yes to start this tournament automatically at the time given above. Any tournament with Initial Seeding set to Manual will seed randomly if Auto Start is enabled.

{info} Tournaments set to auto-start will revert to manual start if the minimum number of players are not available at the configured start time.

{info} This value is for display and not strictly enforced by default. If you want to force teams to build their roster before registering for this event, you should enable Enforce Team Minimum in Team Settings.

{info} To accommodate games where lower score is best (Golf) or higher score is best (Football), recording score has no effect on the actual result reported. Users will still have to select a win or loss in addition to entering a score.

Rules
Rules are displayed on the tournament rules page and also to users before the register to an event. HTML is allowed.
Visibility
Set to visible for users to find the tournament, or set to hidden to hide the tournament. 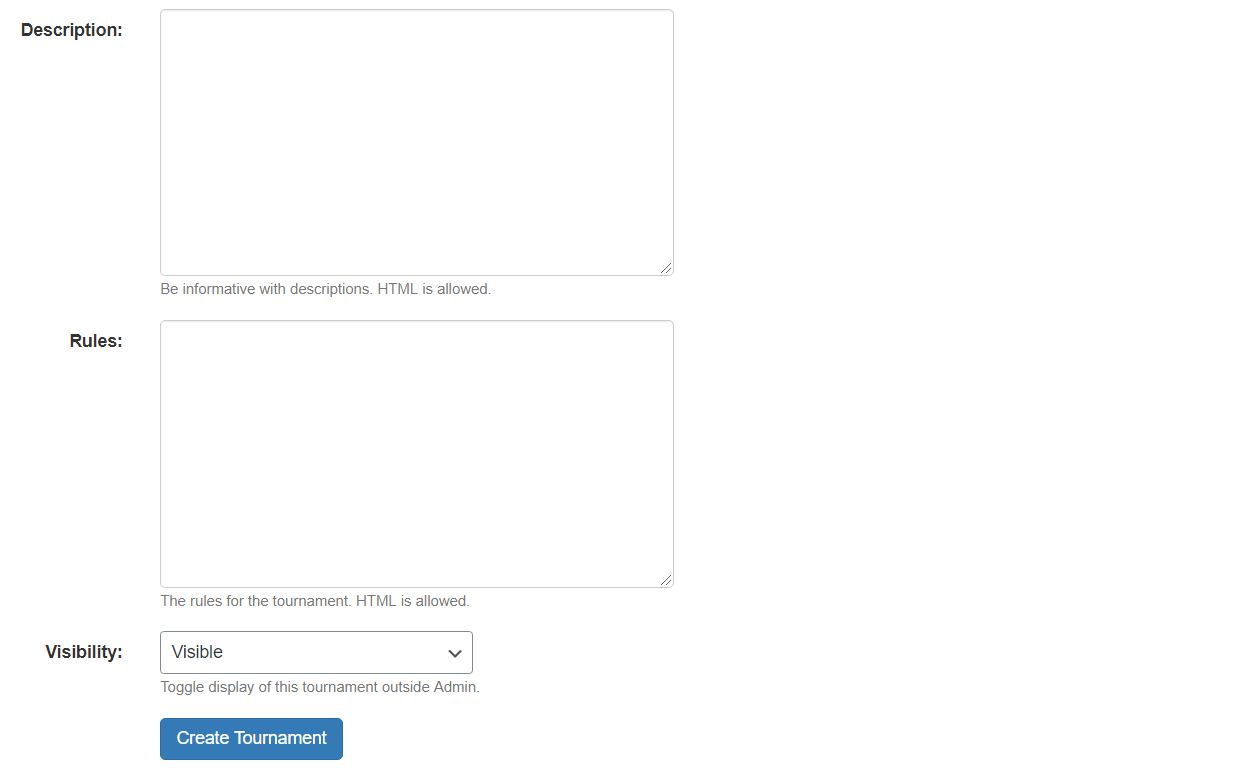 You may manually start a tournament at any time as long as there are at least 4 competitors registered (or 4 competitors checked in when check-ins are enabled). Once started, the brackets will appear, competitors will be notified via email, and matches may be reported.

If the selected tournament is set to manual seed, the Seed Tournament page will appear.

Clicking on the icon to end a tournament will set the statuts to finished regardless of any matches still in progress.

You may edit a tournament at any time; however, certain fields are disabled depending on several factors.

A tournament that has started may be reset. This will erase all matches and bracket seeding.

Use this link to clone the current tournament. A new tournament with an edited title and start date set to today with all other settings identical is created.

You may manually register competitors for a players or teams tournament. For a players tournament, enter the Player name and click Register. For a teams tournament, enter the player name and select whether to use a new or existing team. If selecting to use a new team, enter the team tag and team name, and then click register. A new team will be created for the given player and that team is now registered for the tournament. If selecting to use an existing team, then select the teams available for the given player from the drop down and click register. The existing team for that player is now registered for the tournament. 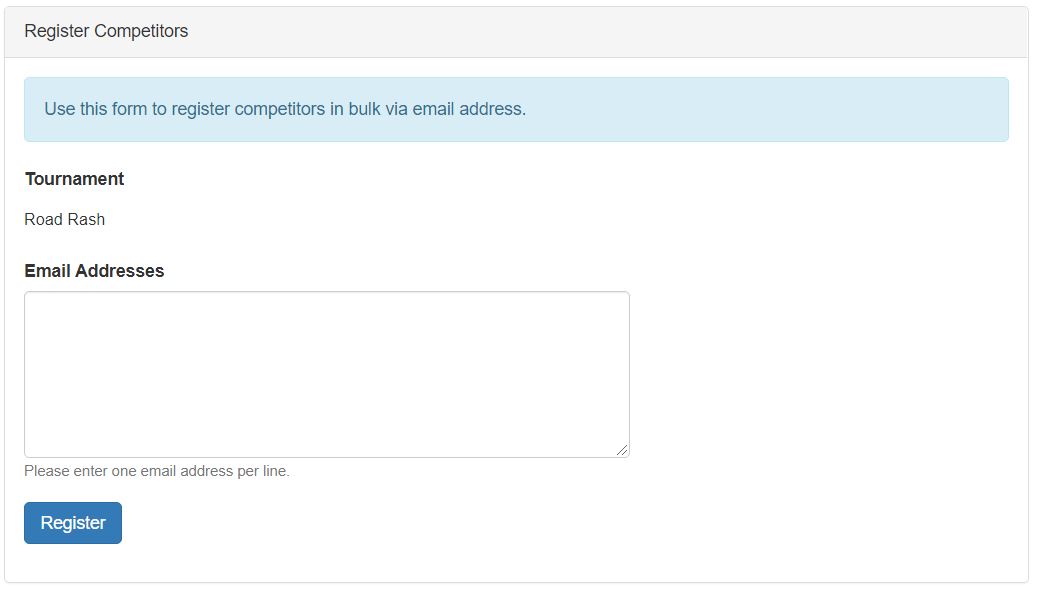 To report a result for a tournament, you should first select the tournament from the drop down provided.

Once a tournament has been selected, all of the matches for the selected tournament are listed. Choose the winner using the radio buttons provided and click Report.

If the selected tournament uses Double Elimination, those matches will appear under the Loser's Bracket section.

Any result a user has reported and not yet confirmed appears in the Confirm Results table. To confirm a result, click the Confirm link. You may click the delete link to clear the reported match.

Any tournament match result that has been disputed between competitors is listed here. You will see who reported the win, and given the option to select a winner.

When creating a tournament, there are three seeding methods to choose from. One of those methods, Manual, requires you to arrange competitors on the bracket before the tournament begins. When you start a tournament that must be manually seeded, the Seed Tournament screen appears.

There are two main sections on this page. The left is a preview of the brackets, and the right lists all of the competitors. For each match in Brackets, there are two drop downs with a list of competitors. Selecting a competitor in a drop down will automatically remove the competitor from any other match. In addition, the match drop down which just had your selection removed will turn red and display the text Please Select.

When you are finished seeding a tournament, click the Seed button and the tournament will begin. 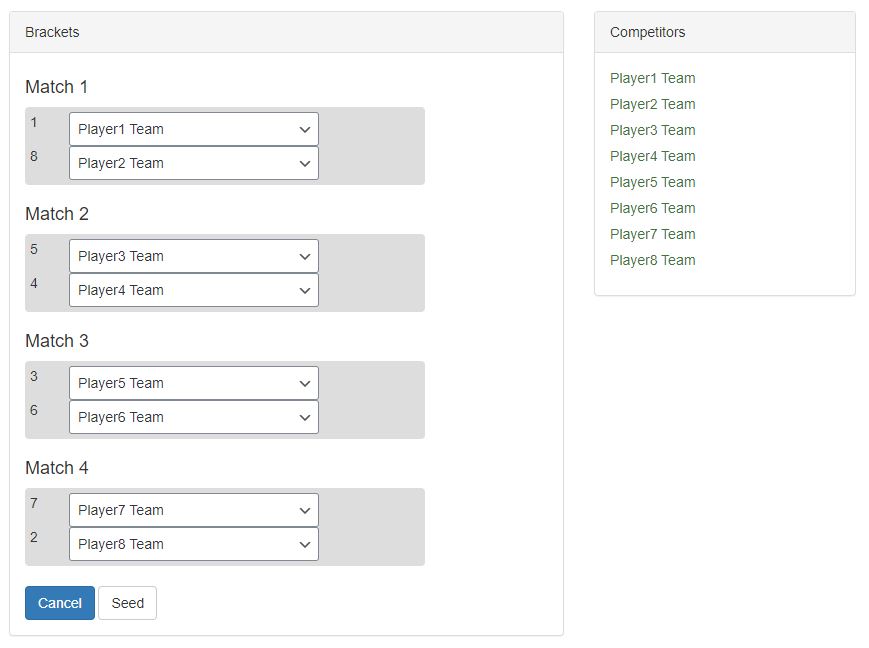